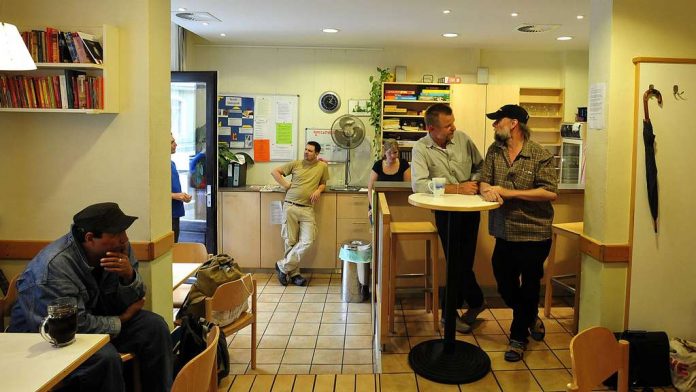 Munich – Now you are pushing back in the afternoon in the tea room, “come on” at the zenetti street: people who have no shelter. For several years the establishment of the Protestant relief organisation Munich is crowded, especially in the Winter, hopelessly. Remedy the new Days gathering, the “Otto & Rosi” the work should provide welfare (AWO) at the Rosenheimer Strasse 128d. In the autumn of the new homeless should be device unlocking. But now The point of contact will only be able to 2019 open.

people wait outside in snakes

70 seats in the tea room, “come”. Every day about 200 people came to last between 14 and 20 o’clock to take a shower to warm up, to cook, Post office, or to one of the social workers for advice. “We are every day more than jam-Packed,” says tearooms-conductor Franz Herzog. “No later than 13.15 you are standing outside already waiting in line to be able to in the lists for showers and washing machines.”

Around 9,000 people are currently registered in Munich as a homeless, 550 of them life – according to conservative estimates – in the street, because they want to be in a property or are not entitled to.

in Order to create in the face of rising homeless figures in relief, decided the city Council in 2017, a second-day meeting. For the current year, the city provided 930.000 euros for the new days of the meeting, from next year it will be a year of almost 700,000 euros. The contract for the project of the AWO, the quickly found a site with 300 square meters for the establishment of received. The municipal housing company Gewofag mediated rooms in Rosenheimer Strasse 128d, in which the Gewofag-residential forum was housed before it moved to Neuperlach.

“We are already being asked when the room finally opens,” says Duke. However, the AWO must at least match this year. “Otto & Rosi will not be before 2019 opened,” according to AWO spokeswoman Karin Sporrer on request. Unfortunately, not is to say at the Moment, “sure, what time in the coming year”. Reason Verzögerugen during the renovation of the rooms on the ground floor and in the basement. Next week, you know. Somehow, says Duke, will you survive in the tea room this Winter. “But we hope that it can soon go out in the AWO.”

More help for Bavaria’s homeless: has promised the Prime Minister, Markus Söder (CSU), during a visit in July 2017 in St. Boniface. Frosty living room: How the homeless survive the Winter under the Wittelsbacher bridge in Munich.