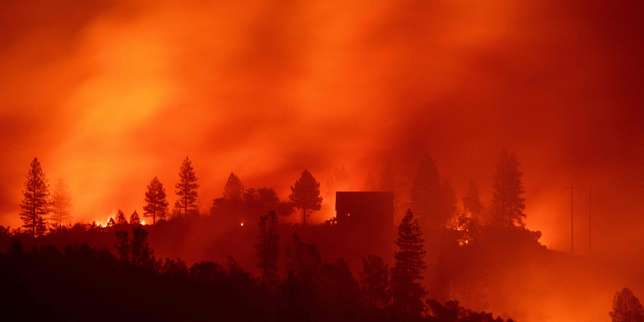 A few days of the COP24 on climate to be held in December in Katowice, Poland, the united Nations attempts to challenge consciences. The greenhouse gas emissions that cause global warming, have reached new peaks of concentration in the atmosphere by 2017, has expressed concern Thursday 22 November, the world meteorological Organization (WMO), which calls for urgent action to reverse the trend.

” The scientific evidence is unequivocal. If we do not reduce rapidly the emissions of greenhouse gases, including CO2, climate change will have irreversible consequences and, still more destructive to life on Earth “, said Petteri Taalas, secretary-general of the un agency WMO.

” The sensitive period for the action is about to be completed “, he warned, a few days of COP24. The international community needs to finalize the Paris agreement to achieve the objective of limiting global warming to less than 2 °C or 1.5 °C compared to the level of the industrial revolution. The agreement encourages countries to increase their commitments, which at this point leads the world well beyond 3 °C.

” The trend is worrisome. There is a difference between ambition and reality, ” admitted the professor Pavel Kabat, director of the research department of the WMO, at a press conference.

The numbers : one relatively stable since the year 1000, the concentration of CO2 in the atmosphere has increased by 40 % in a century

According to the WMO, the concentrations in the atmosphere of carbon dioxide (CO2), methane (CH4) and nitrous oxide (N2O), the three greenhouse gas, have risen again in the last year, to reach “new highs” across the globe.

” nothing indicates a reversal of this trend, which is however the decisive factor of climate change, rising sea level, acidification of the oceans and an increase in the number and intensity of extreme weather events “, pointing to the WMO.

The greenhouse gas receives a portion of the solar radiation passing through the atmosphere, which thereby heats up. This phenomenon, called “radiative forcing” by experts, has increased by 41 % since 1990. And CO2 is by far the main responsible for this warming.

” The CO2 persists for centuries in the atmosphere, and even longer in the ocean. However, we do not have a magic wand to remove all of this excess atmospheric CO2 “, recalled the deputy secretary general of the WMO, Elena Manaenkova.

The answers to your questions : “all Around, major adjustments will be needed to cope with the impacts of global warming”

Its concentration in the atmosphere has reached 405,5 parts per million (ppm) in 2017, an increase of 2.2 ppm lower than that reported in 2016 (+ 32 ppm), period during which was observed a strong El Niño episode, that had led to droughts in tropical regions, and had reduced the capacity of forests and vegetation to absorb CO2.

“The last time the Earth saw a CO2 content is comparable, it was 3 to 5 million years ago : the temperature was 2 to 3 °C higher and the sea level was higher by 10 to 20 meters compared to the current level,” explained Mr. Taalas.

methane, which is the second largest greenhouse gas persistent, has reached a new peak in 2017, representing 257 % of the level he had in pre-industrial times.

experts have also observed last year in an upsurge in ” unexpected “, a powerful greenhouse gas, reducing the content of ozone, CFC-11 (trichlorofluoromethane), whose production is governed by an international agreement to protect the ozone layer.

analysis : humanity subject to climatic disasters in the waterfall