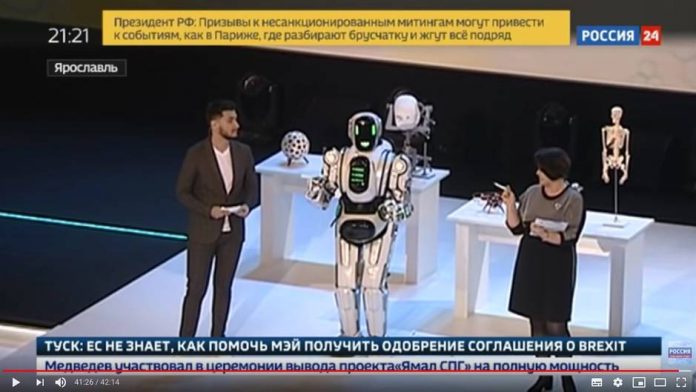 The Russian TV channel “Russa-24” has celebrated a new robot and its capabilities. It turned out that the robot wasn’t a real robot, but a man in costume. The British “Guardian” reported on Wednesday. The new “High-Tech miracle” Boris has been presented, therefore, in the case of a youth forum for robot technology. During the presentation, it was said, among other things, that the robots have even learned to dance and not bad at all.

“Why did the robot so many unnecessary movements when you Dance?”

Some bloggers not discovered but, according to the Guardian, that the TV-report is the critically acclaimed robot something is wrong. So questions such as “Where the Sensors actually are?” or “Why the robot has made so many unnecessary movements while Dancing fast?” according to. Shortly thereafter, photos were shared on Twitter, the show, like a man in the robot slips suit. Boris is not a real one. Or should we say better – than the Russian state TV thought? The costume of the company “Show of Robots” the cost, according to the “Guardian” about 3340 euros and is equipped with a microphone and a display.

The report on Boris had disappeared on the Wednesday, first from the Youtube channel of the transmitter. A few hours later, he was then called up again. In the social networks, the report wildfire spread. Many Users shared the Clip and the photo of the man who rises in the robot suit, for example, on Twitter.

If only the TV station fell for the Fake-robot or the operator wanted to sell the robot-appearance as authentic, is unclear. A trained eye, even in the case of the younger participants of the youth forum will notice the Fake but relatively fast.