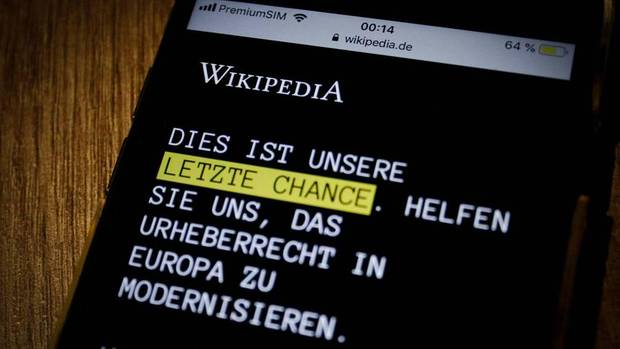 Who is searching on Wikipedia for information, not find it. “Wikipedia.de” there are currently only the note that “the decision of the authors”, “Wikipedia today in Protest against parts of the planned EU copyright reform to turn off”. The law is on 27. March to be adopted by the Parliament of the European Union. “The proposed Reform could lead to that the free Internet is severely restricted,” warns Wikipedia.

thousands of people demonstrated in the streets against the EU copyright reform. An Online Petition with the name “stop the censorship machine – Save the Internet! #Upload filter #Article 13” has so far been signed by over five million people.

operators of Internet platforms, such as Facebook or YouTube are to be taken according to article 13 in the future, more responsibility, when it comes to the protection of copyright. Possible breaches of licences should already be in front of the Publish when you Upload content to prevent and detect. Many believe that this could run on a wide use of Upload Filter, and the fear of a possible censorship and a restriction of freedom of speech and freedom of the press.

“wikipedia.de” today also pointed out that all the sites would need to acquire for short text excerpts from media articles licences, “a new publisher to comply with the law (article 11)”. Further, it States: “Although at least Wikipedia is not expressly excluded from article 13 of the new copyright Directive (article 11), will suffer the Free Know even if Wikipedia remains an oasis in the filtered desert of the Internet.” At the end of the platform, please contact the members of the European Parliament.

On Twitter, there are already a lot of reactions to the Wikipedia-action, many celebrate the platform for this: “Hammer action of you, even though Wikipedia is not affected by the #Article13! THX for the solidarity,” it says, among other things, or also: I think a Shutdown of YouTube for a day cool.” Another User finds it sad that “Wikipedia is not switched off in the whole of Europe”. In fact, only the German Wikipedia page is currently not accessible.

For the 23. March is planned a day of action against copyright reform. According to the Website “savetheinternet.info” currently announced for this day, more than 80 demonstrations across Europe, including, among others, in Krakow, Stockholm, Warsaw, Zurich, Luxembourg, Vienna, Amsterdam, Leipzig, Frankfurt, Hamburg and many other cities.