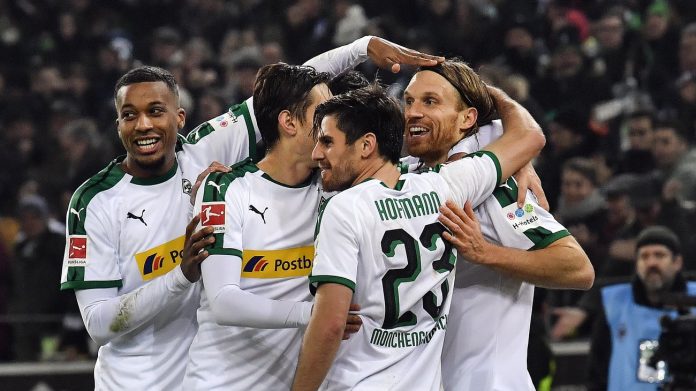 Borussia Mönchengladbach has continued its winning streak with a 4:1 (2:1) against Hannover 96. Although the game started off positive for Hannover 96: Bobby Wood opened the scoring after only 22 seconds with the fastest goal of the current season, the guide for the state of lower Saxony. But the hosts were not deterred, and put the game on your normal attack. So Thorgan Hazard was in the 7. Game minute the equaliser. Right-back Michael Lang put before the interval (44.) to 2:1. Previously, the world champion Matthias Ginter was after a violent and ill-fated clash with Hanover Noah Joel Sareren Bazee and was immediately hospitalized to have been replaced. Hannover had plenty of possession, could get but less chances as Gladbach. After almost an hour, captain Lars Stindl opened the scoring after a cross from Hazard to 3:1. The 4:1 scored by substitute Denis Zakaria. With the ninth victory in the series in front of a private audience, Borussia Mönchengladbach remains in second place in the table. Since the 19 away games without a win, lower Saxony show, however, only relegation rank 16.

Werder Bremen has been able to avert a fourth defeat in series. The Swedish defensive player Ludwig Augustinsson saved with his goal in added time on Sunday in a 1:1 (0:1) at SC Freiburg. The team of coach Florian Kohfeldt, however, showed a wide stretch of weak performance and did not have much luck, because the hosts used their chances to win. The Freiburg-based Luca waldschmidt (11.), Pascal Stenzel (17.) and Marco Terrazzino (25.) several times it failed to turn their shots on goal from distance. Another distance shot of woodland Schmidt (40.) blocked Central defender Niklas Moisander, with the outstretched Arm. Referee Bastian Dankert decided then to penalty, the under-21 national team player Luca Waldschmidt (42. Minute) turned. Waldschmidt (50.) and Lucas Höler (85.) Freiburg would have been able to guide even expand, but failed to goalkeeper Jiri Pavlenka. The was punished by a late Offensive of the Bremen, the defensive player Ludwig Augustinsson to the equaliser. Werder Bremen is in seventh place, Freiburg is eleven.

FC Schalke 04 has made the connection to the table the midfield in the Bundesliga. The Royal blue set against the earlier point of the same 1. FC Nürnberg 5:2 (2:1). Steven Skrzybski (26./84.), Amines Harit (32.), Guido Burgstaller (70.) and Bastian Oczipka (90.+3) secured the Vice-champion of the preseason in front of 62.271 Fans in the sold-out Arena with the victory. Federico Palacios (38.) and Adam Zreľák (78.) scored for Nuremberg in the interim goal. After a yellow-red card against Nuremberg, Robert Bauer, the Franks no longer able to turn away in defeat, however. Schalke climbed 13 points in 14th place, Nuremberg is a ten meters 15. And away this season, still winless Swiss francs have been waiting for 25 years to a success in Gelsenkirchen and can fall back on Sunday, even on the relegation place 16.

What seemed in the last season, the unthinkable occurred in Munich: FC Bayern and Fortuna Düsseldorf have parted ways in a draw 3:3. In the first half hour, Bayern were yet to be decided is stronger, Niklas Süle met to 1:0 (17. Minute), Thomas Muller secured a little later the 2:0 (20.). Just before the break of düsseldorf midfielder Dodi Lukebakio for the guests (44.). In the 58. Minute, Thomas Müller made it a goal and the victory of the Bayern seemed certain – however, with Dodi Lukebakio: In the 77. Minute of düsseldorf, who also plays in the Belgian national team met, to the 2:3 again and put in the extra time it (90.+3). Bayern are nine points behind the table first Dortmund.

The FCA had a bad Start: after 54 seconds, the guests rose to 1:0 through Jonathan de Guzman. Frankfurt dominated the first half, and shortly after the break, Sébastien Haller extended the lead to 2:0. The hosts could not compete against the strong Frankfurt and had to stay in the 78. Minute the third goal for Eintracht plugging (Ante Rebić). A small consolation for Augsburg: just before the end, Sergio Córdova managed a consolation goal for 1:3 for Augsburg. However, the victory in the 250. Bundesliga game of the Augsburg went to the Cup winners ‘ Cup in Frankfurt.

In Mainz, the table leader Dortmund was a guest. The FSV was launched from the ninth-place game. In the scoreless first half, the teams were similarly strong, with Mainz was put mainly on the Defensive. Paco Alcácer, the 1:0 was a the 66. Minute, two minutes after he had been changed. Compensation was provided by Robin Quaison (70.). Dortmund’s Łukasz Piszczek hit the Torunterkante and 2:1 for BVB (76.). Dortmund have not won the victory in front of 33.305 Watching without effort, could eventually secure to Play his seventh win from eight recent Bundesliga.

Also brought in Berlin in the afternoon a draw: The Hertha and Hoffenheim parted 3:3 (1:2). Before 44.508 Spectators in the Olympic stadium, Vedad Ibišević (13 met.), Mathew Leckie (71.) and Valentino Lazaro for the host, which prevented the fifth victory of the hope Heimer in a row. Guests with early goals from Kerem Demirbay (1.), Andrej Kramarić (10.) and a further goal from Ermin Bičakčić (55.) temporarily with 3:1 in the lead, had to settle for a point.

Leipzig had to give VfL Wolfsburg with 0:1 defeated and slips on court four. Jérôme Roussillon (50.) finished with his goal for Wolfsburg in the success of the Saxons. Leipzig had scored in the last ten League defeat play. For Wolfsburg it was the first League win for about a month – deserves. Wolfsburg had the better chances and was braver than the guests.

Friday’s game was by many crushingpayments shaped. Alone in the first half, referee Robert Schroeder showed six Yellow cards. The Leverkusen played first, fast and smooth, recycled your chances but. Bayer striker Kevin Volland, the Croatian Vice-world-champion-Tin Jedvaj and Kai Havertz awarded very good options. After the break, Stuttgart played first better. The best Chance of Ex-national player Mario Gomez with a shot from 18 meters. In the case of the Leverkusenern Volland awarded his fourth Chance, it was the biggest: After a cross pass from Karim Bellarabi, he came to Stumble and shot the Ball from five meters over the empty goal (60.). It is only in the 76. Minute Volland turned the flank of Havertz to 1:0. The 2:0 was followed in the 83. Minute, also from Volland. After the renewed defeat of VfB Stuttgart remain so for the time being, table the last.