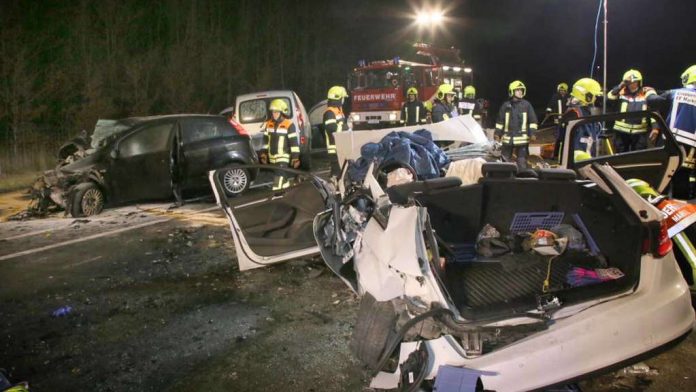 Marktl am Inn – a serious traffic accident near Marktl am Inn in the district of Altötting has been killed on Tuesday, a man. Four other people were injured.

As the police reported, the 51-Year-old against 18.25 PM on the B20 from Marktl, in the direction of Burghausen on the road than he is at the height Schützing from as yet unknown causes on the oncoming lane and got there head-on with several oncoming vehicles collided. The driver, according to initial information, a mortician from Austria – had no Chance: He was trapped in his car and died on the scene from his injuries.

accident on B20 in Marktl am Inn: wife hard

A 53-Year-old from Rottal-Inn was also trapped in her car so hard that she had to be freed by firefighters from the wreckage. She suffered serious injuries. The driver from the other three in the accident-involved car were slightly injured and taken to nearby hospitals. On all vehicles damage total.

Approximately 50 emergency responders from various fire and numerous other rescue forces were fighting back in use. The B20 was locked for several hours. How it could come to the terrible accident, determined now to be a reviewer.