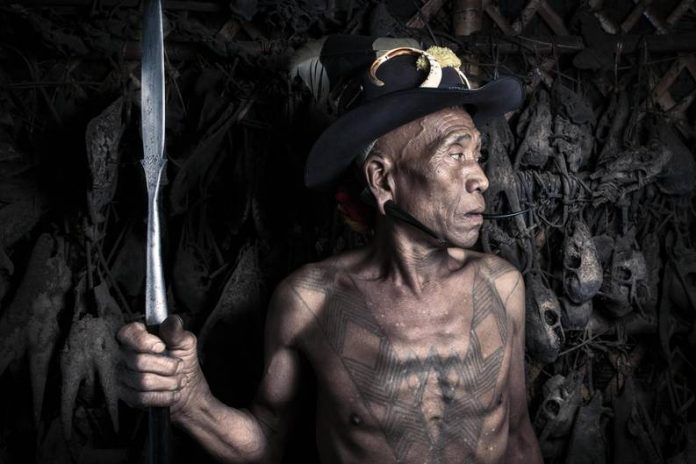 “no one knows exactly where the Naga come from. Their languages all come from the Tibeto-Burman family, and the ancient Naga-men, the beginning of the 20th century. Century have been questioned by the first anthropologists, declared unanimously that the tribes were moved from the North East on their hill – that means from Tibet, Eastern China, or even Mongolia.” With these words, in English, begins the Preface to the photo book “The Konyaks – Last of the Tattooed Headhunters”, which tells the story of a world that sounds to us as Western Europeans, as thousands of years ago. The Naga pulled out a good reason on the hill: they had to keep the surrounding area in the eye. “We were like frogs in a well”, have one of the old tribal leader said. “We knew that there were other frogs in other wells, except our immediate neighbors, and they were all our enemies.” Alone of the Konyak tribe had 28 dialects, many of which were not mutually intelligible. In addition to their own tribe members, there was by this Isolation so around only enemies – all potential victims of the head-hunting, the farms, the Konyaks.

Some of the head hunters has visited the Dutch photographer Peter Bos, has an impressive Instagram Account, and portrays some of the men are almost 100 years old. Today, only the tattoos remind on their bodies in the Era of head-hunting, which was followed up until the end of the 1960s and early 1970s: The Konyaks believed that the human skulls of their enemies would bring fertility to the fields and people, they demonstrated their strength by hanging the severed heads of their homes. Every Konyak-tribe has its own Tattoo symbols, the body of each hunter tells the story of the man who stands before you. Your jewelry the warriors finished with the utensils from the animal Kingdom, bangles made of ivory, Ohrplugs from goat horns and headdress from the tusks of boars.

The Christianization and its consequences

The book “The Konyaks – Last of the Tattooed Headhunters” in English on Amazon to purchase, tells of the discovery of the up in the middle of the 19th century. Century of isolated tribes, of the Visit of the missionaries, the Attempt of Christianization. In the Second world war, about 100 years later, was suddenly the world’s attention to the Region: Three Japanese divisions faced by today’s Myanmar and invaded by the Naga hills to India. The name of mission outposts, such as Kohima and Imphal were known as the theatres of war. With the invasion of the troops, roads, and runways were built, and more missionaries came into the country. The proportion of Christians among the Naga grew up in 1971 by almost 18, more than 88 percent. The Naga have experienced in 30 years, a development that had been used in Europe for more than 1000 years. Paraffin lamps replaced torches, guns replaced spears and swords, Doctors prescribed penicillin and made a Skull-grinding shaman superfluous.

The prefaces of William Dalymple and Peter van Ham read so exciting as a Thriller, and the introductory text of Phejin Konyak is an autobiographical retrospective of one who has lived up to his fourth birthday with his family in the Konyak area. Phejin Konyak, author of the book, has visited alone, then using the photographer Peter Bos village, for the village of his old home, to document the Tattoo culture, personal stories, write them down, as well as songs, poems and legends of the tribes. Him was to become aware of the fact that there will be many of the traditions of the Konyak soon.