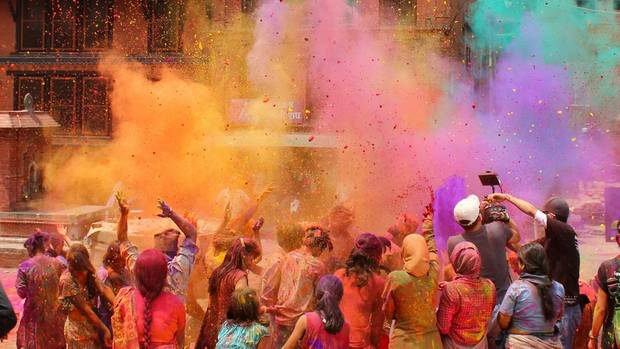 Who wants to celebrate spring properly, should make a detour to India

The spring is colorful and this is the Hindu Holi Festival also. In the exuberant spectacle of Indians and all of the shower, the celebrate to with color powder and water and hot spring, welcome.

The Name is derived from the demoness Holika. So the people celebrate the victory of Lord Vishnu over the demon, rising at the end of the dispute in flames. For this reason, it is lit the first night of the Festival, traditionally a fire, and Holika-a doll made of straw burned. The message is clear: Good triumphs over Evil. After the rite is celebrated hilariously all the barriers due to caste, age or gender seem to be in this time.

Holi is almost celebrated everywhere in India, it has only different name. With “Holi” is the Festival mainly in Northern India and Nepal. In Maharashtra it is called “Shigma” in Goa “Shigmo” and in West Bengal “Dol Yatra”. In South India it is known as a “Kamadahana”. While in the South, the celebrations take place mainly in the temples, in the North a lot on the streets, where it is really colorful.

The colors for the powder were originally made of flowers and roots. Nowadays, many of the Powders, which can be purchased anywhere, of a chemical nature. Of course, visitors will be able to supply with natural pigments such as Henna or turmeric. In any case, you should wear old clothes to the Feast, because according to the color of battle you can throw away this mostly only.