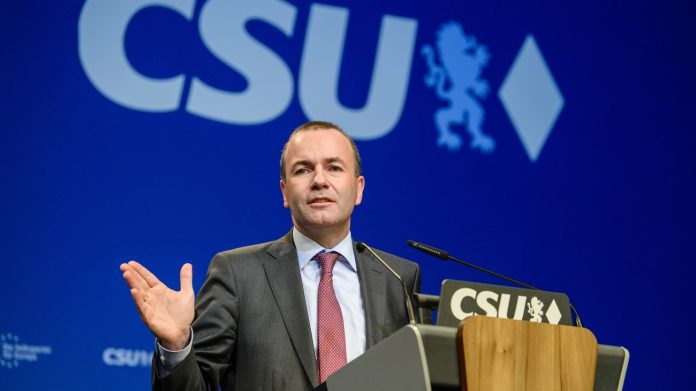 the Chairman of The group of the European people’s party (EPP), Manfred Weber has been elected in the first place in the CSU list for the European elections in 2019. In Munich 271 of 274 delegates for Weber voted at a meeting, 98.9 percent of the votes.

Weber will also act as the top candidate of the EPP. On 8. November, he had set himself against his Finnish Challenger Alexander Stubb. If the European Conservatives should emerge from the European elections again as the strongest group, it is considered likely that Weber Jean-Claude Juncker as President of the EU Commission follows.

Weber campaigned on the Assembly for a strong, United Europe and warned of national self-interest and extremism: “We allow ourselves to Europe of any of populists and extremists, make a mess,” said Weber. The European elections decide whether to go on the European continent, the way of partnership and cooperation, or whether Europe would be driven apart.

CSU Manfred Weber speaks about the plans of the EU Commission President, The EPP top candidate, said at a meeting of delegates of the CSU, he wanted to lead Europe, “Christian-social” in the future. An EU-membership of Turkey, soil and water. © Photo: Matthias Balk/dpa

The CSU Chairman Horst Seehofer has described it as a “historical process” that Weber CSU politicians, the Europe-wide leading candidates of the Conservative position. Weber could count on the unanimous support of the party. “The CSU was a party,” added Seehofer.