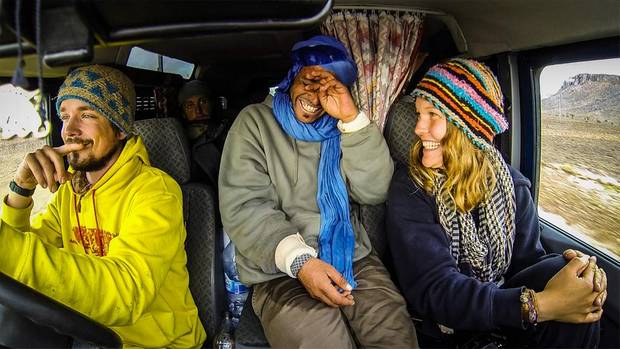 Lena Wendt and her friend Ulrich Stirnat are breaking out for two years through West Africa, traveled

Easy. Leave the everyday behind. In the Here and Now. What more and more people in Germany can only dream about, but don’t trust, have made Lena Wendt and Ulrich Stirnat. Actually wanted to take the Couple only half a year off with your old Land Rover from Hamburg to South Africa drive. But it two years, and a journey through West Africa. From Morocco to the Senegal, Mali, ivory coast, Benin, Liberia, and Sierra Leone.

Back in Germany, the two started a Crowdfunding action with the aim of their impressions of the trip through Africa, a Film that paints a different picture of the continent, as it will provide us with the many clichés that one has in this country. 14. March, it is now so far: “Reiss. Two People. Two Years. A dream” starts in German cinemas.

The book of the travel Film

Parallel to this, Lena Wendt, who has worked in front of the big adventure travel as a journalist, has written a book in which she describes her personal view of things. “Reiss. 46,000 kilometres Road trip through Africa. Or moving in order to learn to life” (Knesebeck Verlag, 240 pages, 16 euros) will be released shortly after the theatrical release on 20. March on the market. “This story is based on my personal experiences, feelings, and experiences during the 22 months that I am together with Ulli travelled through West Africa,” begins the book with the Preface.

Wendts book is not only a travel report of a special kind, with many detailed accounts of the experiences of the 14 West African countries, and colourful photos, but also a plea to leave his comfort zone and to venture out into the adventure. If you want to and still not married, because one sees behind the seemingly insurmountable mountains of obligations captured.

The goal of the book, Wendt describes in her Foreword: “I wish you courage, if you’re not already on the road, start walking. Whatever your dream is, to live catch him! Because let’s be honest, if I can, you can too!”

But what cared at all for the two to give up for two years you controlled and from everyday life-determined life in Germany? Shortly after Lena and Ulli have moved into a common apartment in Hamburg-Eimsbüttel, grabs the journalist, the travel fever, and her boyfriend – while she’s packing six weeks alone back – the Burnout. The collapse of Ulli was one of the triggers has been trip planning and the time-out final address, describes Wendt in her book.

Each Chapter decides with a “lesson of life cunning of the day”. The first Chapter of “Europe” therefore ends with the words: “I do hereby swear high and Holy, from now on, to stop, to make my work about my life. And to take my time, for a while, out of my life get out to look at it from a distance, and with distance.”

who made the book and the Film?

For all that “Far” seen in the cinema and get more Inspiration and ideas of this kind. Also Lena Wendt and Ulrich Stirnat has to make the trip documentation by Patrick, Allgaier and Gwendolin White after her return to Germany, inspired from your video material the group had recorded for friends and family, something Bigger.